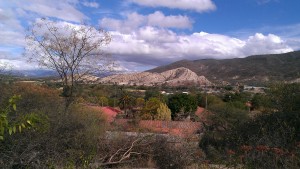 “I will lift up my eyes unto the hills…”

In life things don’t always turn out the way we want them.  We make mistakes.  Others misunderstand.  Calamities happen.  Bank accounts shrink like soap in a hot tub.  The tumor turns out to be malignant.  Sometimes life is so terrifying, so upsetting, so “nerve-wracking” that it is all we can do to shut our eyes and hang on with sheer force of will.

To be candid, I often felt this way as a new missionary in Bolivia.  In my case, not only was I living in a new country, in a new house with my somewhat eccentric mother-in-law, immersed in a new language, and with a new job description and co-workers; I also had a brand-new baby and was slowly recovering from meningitis.  My stress factor was probably through the roof, although like all “good” missionaries I pretended to take everything in stride.

I summed up the courage, once, to talk to my supervisor about all the changes coming at me with the speed and dizziness of windblown snow.  After I had cried out my frustrations to him, he leaned back in his chair and calmly said in his slow, southern drawl, “Don’t worry so much.  I know you can handle it.  You are a mountain girl.  They can take anything.”  Not much sympathy there…but lots of wisdom.

His words reminded me that I AM a mountain woman (I grew up in the Appalachian Mountains of Virginia).  And that mountain women are strong…and courageous…and filled with humor.  Mountain women could not be the fragile flowers of eastern society; they had to work in the fields, hunt, forage for food, provide their own medical care, fight off bears and panthers, and generally be self-sufficient while their men worked “out” (out of the area) all the while carting children around on their bony hips.  I had a rich, sustaining heritage on which I could draw.

But his words also reminded me of another, deeper source of strength:  God.  When I was a young teen, I had attended Christian camp in Virginia.  While there I had won a prize:  I could choose anything out of the log cabin store under $10.00.  I passed up the tempting arrays of candy and the trendy jewelry and chose a small, wooden plaque with a scene of beautiful mountains on it.  Inscribed on this plaque were the words, “I will lift up mine eyes unto the hills, from whence cometh my help.  My help cometh from the Lord” (Psalm 121).  Over and over, I had been comforted and encouraged by this gentle reminder of God’s care for me.  I had tested this statement…and found it could hold me.

A mountain woman in a South American country.  I was an anomaly, to be sure.  But an anomaly planted…and sustained by the God of the hills.  My supervisor was right.  I did stick it out.  And now, 32 years later, I am still being sustained by the same God.  And you can be, too.